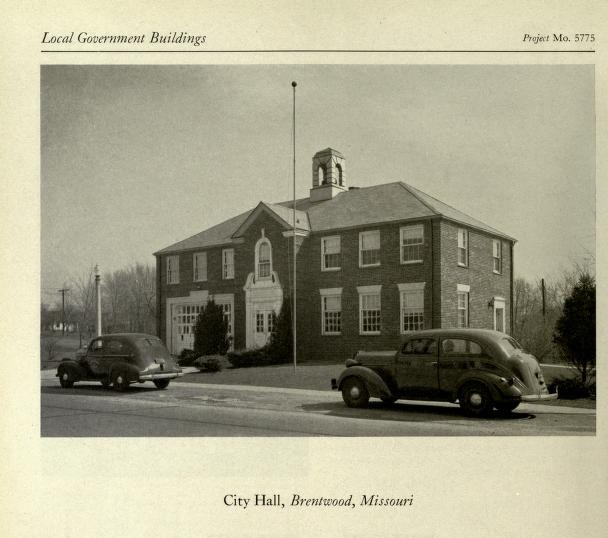 In the late 1800s, the Manchester trail was popular with prairie schooners and mail coaches, as a direct trail to modern day Brentwood. Back then, the area had been called Maddenville after a rather prominent businessman who owned several businesses in the area (blacksmith, grocery store, rock quarry, and barbershop). Some travelers stopped at Porta’s Tavern for a brief rest and then continued on with their journey west, while some never left the area (just outside St. Louis), which allowed the community to continue to grow, eventually building a railroad.

Three land purchases make up Brentwood: Louis J. Bompart bought the first lot of land in 1804, and then Gay and the Marshall family, respectively. Thomas Madden came in the 1870s and soon became a premier businessman, operating the rock quarry, building a tavern, grocery store, barbershop, and blacksmith shop. Because of Madden’s effect on the town, it was soon named Maddenville in his honor.
Because of its favorable location on the Manchester trail, which led mail coaches and prairie schooners westward, it did not take very long for Maddenville to become a thriving community, located just outside of St. Louis. Having a streetcar line connecting the two helped even further.

In 1919, however Maddenville residents realized their neighbors in Maplewood were attempting a vote to annex (or not) their town, so the residents of Maddenville decided to become a village and form their own school district so they would not be annexed. December 15, 1919, Maddenville became the village of Brentwood.
During the 1920s, the intersection of Manchester Road and Brentwood Boulevard became infamous for its illegal activities–particularly its gambling houses and other illegal activities. James L. Willingham, the first mayor of Brentwood (1929-1931) was elected due to his promises of clearing out the village of illicit activity and criminals, which he succeeded in doing. In doing so, he made the town a better place for families, which caused it to thrive once again and become a much more attractive prospect for them. April 12, 1929, Willingham signed an ordinance that turned Brentwood from a village into a city, and therefore was able to determine its own boundaries. If you are looking to sell your home in Brentwood, please reach out to the Wallner Team today!