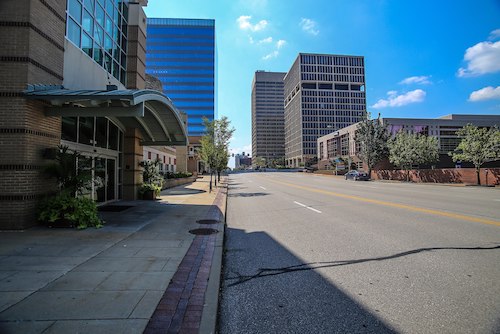 At one time, the Louisiana District was ruled by the same governor as the Indiana Territory. It means St. Louis was also governed in the same way. Due to organizational regulations, foreign slave trade dealings were prohibited. This prevented St. Louis from becoming a powerful force within the area.

However, a slew of prominent figures from St. Louis lobbied against the decision and convinced Congress to reconsider its prohibition. In 1805, Congress declared its intentions to completely restructure the Louisiana District. It was to be renamed the Louisiana Territory and given the opportunity to appoint its own governor.

From 1812 to 1821 (when Missouri was officially made a state), St. Louis was the legal and administrative center of the Missouri Territory. During these years, the region’s population grew steadily, and it conducted a variety of important territorial acts. For instance, in 1809, St. Louis’ appointed its first Board of Trustees. These acting trustees were responsible for legislating slavery codes, managing fire services and keeping public streets clean.

They also appointed the first official St. Louis Police Department and opened a jail. As the population grew, it became clear the region would soon meet requirements for incorporation as a township. This was a positive development as townships were free to establish local ordinances without consulting with territorial powers.

The War of 1812, which saw the United States battle British forces, triggered a population boom. After its resolution in 1815, the number of residents in both St. Louis and the wider Missouri Territory increased dramatically. Around this same time, the Old St. Louis County Courthouse was built on land specially donated for the purpose.

The expanding population sparked fervent interest in the possibility of statehood and independent legislature. In 1820, Congress enacted the Missouri Compromise, a bill which officially made Missouri a state but also tried to balance its role as a slave territory with the interests and demands of other non-slave states. St. Louis hosted its inaugural General Assembly and state constitutional convention later in the year.

Two years later, St. Louis was recognized as a city of the United States. William Lane was appointed its very first city mayor and he made health codes, street safety and renovations to the area’s riverfront major priorities. Together with a new Alderman – who would replace the original Board of Trustees – Lane implemented street repairs and even went as far as to rename many parts of the city.

The region’s religious practices would evolve throughout this period as well. In 1802, its Spanish occupiers left and returned rule of Louisiana to the United States. As a result, they also stopped funding churches in the area. This would cause St. Louis to be without a single Catholic priest for almost sixteen years. Catholic priests would visit but none became permanent residents until Louis Dubourg was appointed in 1818.

Dubourg worked quickly and made a significant impact on the new city. He entirely rebuilt its old wooden church, taking it from a simple wooden structure to a brick building. He also recruited additional priests and created a theological training centre. In 1826, a second influential church appeared and, eventually, established its own diocese. It was managed by Joseph Rosati, a well-travelled priest from Naples.

At the same time the Catholic Church was changing shape and growing in influence in St. Louis, local Protestant communities were also developing. In 1818, the very first Protestant Church in the region was erected in the city. It was built by a Baptist missionary named John Peck and it quickly flourished away from the oppressive rule of the Spanish.

Methodists would also be welcomed to the city, but it took the religion a while longer to establish itself. The first Methodist congregation didn’t arrive until 1821 though ministers had been present in an informal capacity for many years. Between 1811 and 1825, scores of new ministries and churches emerged including the Presbyterian Church and the Episcopal Church. Most had existed in some capacity for years but only became official organizations after the Louisiana Purchase in 1803.

Christian denominations would remain the most influential religious groups in St. Louis for many decades. It wasn’t until the 1930s that any alternative faith communities began to build a presence. In 1837, the first Jewish church was established and called the United Hebrew Congregation. It was followed by an increase in the number of Mormons in the area, many of whom had been resident for some time but were only just beginning to organize.

Despite this hotbed of religious activity, St. Louis before the Civil War was a surprisingly secular environment. The most fervently religious and most influential worshippers were still the Catholics and, among those who weren’t, the popular choice was no religion at all.

In the wake of the Louisiana Purchase, the economy in St. Louis was still heavily supplemented and supported by fur trades. The primary fur traders in the region were the Missouri Fur Company owned by Manuel Lisa and the legendary Chouteau Family who famously forged an alliance with the Osage tribe of the Great Plains.

Due to its prime location and access to key resources, St Louis was one of America’s most prominent trading posts. It attracted a slew of wealthy investors and a great number of immigrant families in search of work and business opportunities. Printing and banking were two of the fastest-growing industries. In 1808, Joseph Charles established the region’s first newspaper. The Missouri Gazette was the first print news publication west of the Mississippi.

The arrival of the steamboat, in 1817, was a positive development which brought new jobs and created exciting new industries. Fast-moving rapids to the north made St. Louis an appealing prospect for increasingly large ships and it soon became a hotspot for maritime activity. By the 1930s, the city would be a thriving inland port that welcomed hundreds of trading ships every year.

The steamboats brought more than jobs. They came laden with new products and technologies the likes of which St. Louisans had never seen before. This was a major boost to the economy. Soon, the city was awash with retail stores, commercial banks and wholesale outlets. Brand new ideas were arriving thick and fast and the cleverest understood it was the perfect time to make a fortune.

The fur trade in St. Louis would continue to be a profitable industry well into the 1940s. Although, in other parts of the country, it was already in decline. Despite its myriad controversies and bloody history, it was responsible for some of the greatest early feats of exploration. In 1822, Jedediah Smith joined the William H. Ashley – Andrew Henry Fur Company. It was the start of an iconic career which would see the explorer become the first to trek overland to California. While beaver fur declined in value during the early 1940s, buffalo hides, and other types of fur remained popular.

One major downside to St. Louis’ rapid (and initially uncontrolled) population growth was a serious outbreak of cholera. In 1849, cholera caused close to 5,000 fatalities in the region. It was a stark wake up call for city officials who ordered a large scale renovation of the city’s sewers and relocated several of its cemeteries to prevent groundwater contamination.

During the same year, a huge fire erupted on a visiting riverboat and, due to the crowded nature of the city’s port, quickly spread to more than twenty other vessels. From there, the fire managed to travel from the water to the centre of the city where it razed a sizeable proportion of the commercial centre. The disaster led to a complete restructuring of the docks. New levees were constructed to move currents towards Missouri, reduce sand bars and make the St. Louis landing a safer place for large riverboats.

Education was a lesser priority for St. Louisans during the 1810s. Although, it doesn’t mean there weren’t opportunities to learn. They were just more readily available to individuals with wealth. Private libraries flourished but the majority of locals could not read. The region’s first schools were similarly limited. They charged substantial fees and most lessons were performed in French. They were a prospect only for the wealthiest families.

The first major changes to this elite system came in 1818. The Catholic Church established Saint Louis Academy, a school without fees that, nevertheless, required students to dedicate themselves to religion and religious study. After applying for a state charter in 1832, it was named the first chartered university institution west of the Mississippi River. It would go on to teach a litany of now iconic thinkers. However, up until the 1840s, it remained a largely seminary institution with a primary focus on religious education.

The city of St. Louis welcomed its second university institution in 1853. It was established by William Eliot, a prominent figure within the education movement and a champion of civic facilities, public school systems, and charitable organizations. Eliot was the grandfather of the famous modernist poet T. S. Eliot. He founded a number of educational organizations including the St. Louis Country Day School and the Mary Institute for Girls.

When Missouri was granted statehood, it was given so on the basis the region would continue to operate as a slave-trading territory. Throughout the 1840s, the number of slaves that were resident in St. Louis steadily increased. However, they did not keep pace with the growth of the general population as might have been expected.

The population of St. Louis grew but interest in owning or trading slaves was not expressed by many of the new arrivals. By the 1850s, the resident slave population had stopped increasing and started to decline. According to documentary records, in 1850, around 3,200 black people lived in the city. There were many slaves among them but there were also lots of free deckhands, servants, artisans, musicians and other independent workers.

For those who remained in servitude, conditions varied greatly. Some slaves were permitted to earn a salary and even purchase their freedom for a price. Other slaves were eventually released on goodwill. Those living in the worst conditions often attempted to flee bondage using Underground Railway communities. A small percentage actually filed legal suits to assert their right to freedom in a court of law.

One of the most talked-about legal cases was brought by a man named Dred Scott. Together with his wife, he sued for his freedom in court basing his claim on the fact they’d already spent many years traveling with and working alongside their master in states where slavery was outlawed.  Knowing about these things might not help you sell your house in St. Louis, but the history of this city is important nonetheless.